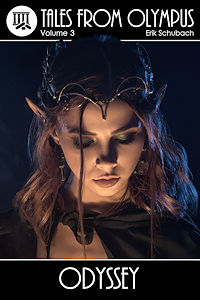 The United Races have become stronger in the centuries after losing their greatest beacon of peace and gentleness. Olympus has moved the palace and capitol City Tree of Alfheim into the citadel in case the Jotunn reach the Olympian's host world.

The daughter of Queen Jania Sure Step, the All Mother of the LjůsŠlfar and DŲkkŠlfar elves, is at a crucial juncture in her life as she becomes an adult. She must choose from three paths before her, yet she feels none of those are her calling.

Crowned Princess of the Elves, Arin, named for the fallen Hero of Asgard and Olympus, finds a path lost to her people and restarts old traditions so that she may stand as the Iron Wall for her Elvish heritage.

But when both Titan and Frost Giant Star Killer vessels threaten her world, will her resolve be enough? And what are these flashes and visions she has been seeing since she was born?

This final chapter of the Tales From Olympus holds the key to a universal peace, or Alfheim's fiery end.

(The Tales From Olympus are the continuation of the Valkyrie Chronicles)
Odyssey is available at the following retailers...
eBook

Other books in the Tales From Olympus series...
Tales from Olympus is a continuation of the Valkyrie Chronicles series...
©2021 Erik Schubach | About | Contact