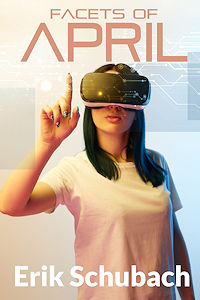 After the polar ice caps melt in the Thaw, the Corporations take control of the flooded zones and create virtual utopias over the great cities of the past that rest below the waves.

April Yale is accepted into college, in the stilted mega-city of Greater York, to study programming and robotics for the Frame, the massive worldwide information net which hosts countless Virtual Reality and Augmented Reality locations.

On her first day of class, her father vanishes and corporate agents and military come asking questions about him and his location, claiming he has stolen top secret experimental military technology.

April's life changes forever as she and her college professor, Doctor Adya Konda, go in search of April's dad, both on the Frame and across the mega-metropolis. Truths are uncovered that may be too much for April to handle.
Facets of April is available at the following retailers...
eBook