(Shadow of the Scrolls: Book 2) 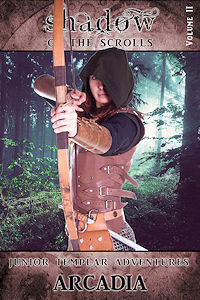 The girls escort Shanicia to the Outlands for another meeting with the Junior Regiment in Arcadia, the fledgling realm across the Uninhabitable Lands to the northwest. They are tasked to ferry the former Great Mother, their Gramma Ranelle home after they complete their business there.

Once they arrive at the camp of the new Arcadius Mountain Gypsy band, they find Rain is not there, so Misty goes with a guide from the mysterious Tree Walkers of Arcadia to meet with the errant Gypsy.

Old enemies abound and secrets are revealed, as the threat exposed reveals the fragility of life, even for one as powerful as Misty.

It seems that the Junior Templar follows in her mother's footsteps when it comes to stumbling into trouble the land of Sparo.
Shadow of the Scrolls: Arcadia is available at the following retailers...
eBook

Other books in the Shadow of the Scrolls series...

Book 2
For more in the Shadow of the Scrolls world, check out its parent series, Techromancy Scrolls...
©2022 Erik Schubach | About | Contact