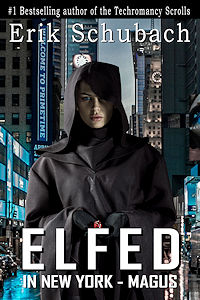 Killishia Renner, Kia, after recently discovering she was an Elf too along with the rest of the world when she Elfed on live television, has had a hectic few weeks with no time to catch her breath.

Working for WTRL Channel 3 in New York City as a probationary investigative reporter, she is assigned to the baffling case of the possibility of actual magic in the world when a video of a ritual involving the Magus of the Arcanium is leaked to a rival news station.

Things are never as they seem as Kia brings her own brand of geeky chaos with her misfit crew into the investigation.
Elfed In New York: Magus is available at the following retailers...
eBook

Other books in the Elfed In New York series...
©2023 Erik Schubach | About | Contact