Return of the Asgard 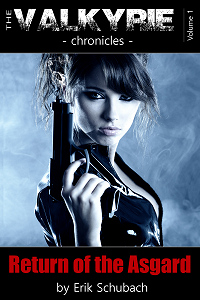 The Valkyrie Kara stood alone against the Ragnarok horde on Earth to ensure that the Asgard race and Valhalla could escape. For five thousand years she has fought and evaded the Ragnarok race on Earth, just waiting for her people to return.

A human woman, Kate, joins her fight against the invading race, showing as much conviction and valor as any Valkyrie. Their friendship quickly becomes something more as they hold the line on Earth in battle to herald the return of the Asgard.
Return of the Asgard is available at the following retailers...
eBook

Other books in the Valkyrie Chronicles series...
The story continues in the Tales From Olympus spinoff series...
©2021 Erik Schubach | About | Contact