Unleashed: Case of the Bull Doggish 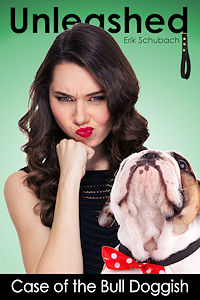 While attending a college football game with her family for Brianne, one of Finnegan's friends gets hurt when the opposing team's mascot, a bulldog, gets taken.

With a hurricane bearing down on New York, Finnegan and her loyal sidekick, Cir Calvin Cornelius Fluffytoes, track down the dog and then run off into the hurricane with it with no way of contacting her Detective wife, Jane McLeary.

Meanwhile, Jane, just one step behind Fin, has the case solved as well. But it is a race against time to find Finnegan, Calvin and the missing dog out in the fury of Mother Nature.
Unleashed: Case of the Bull Doggish is available at the following retailers...
eBook

Other books in the Unleashed series...
©2022 Erik Schubach | About | Contact