Minstrel of the Andrei 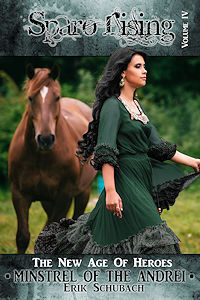 Before there was Laney, there was a minstrel... Sora Ranelle of the Andrei, who rose up to become one of the most loved Great Mothers of the People in the history of Sparo.

From questionable beginnings, and possessing a power she could not control, the Mother of the Andrei sent Rain to learn control under the tutelage of the eldest and most powerful of the Mountain Gypsies, Mother Udele of the Lupei. The old seer teaches control and more to the young woman, whose fate Udele has already seen in her visions.

Over the years, Udele sends for Rain to witness turning points in the history of Sparo. And the Mountain Gypsy clans slowly lose their fear of her explosive magiks and learn to love her as their fierce protector.

On the day of the Choosing, where the Conclave of Mothers select a new ruler, to her shocked surprise, Ranelle is selected to lead as Great Mother of the People.
Sparo Rising: Minstrel of the Andrei is available at the following retailers...
eBook

Other books in the Sparo Rising series...

Book 4
For more in the Sparo Rising world, check out its parent series, Techromancy Scrolls...
©2023 Erik Schubach | About | Contact